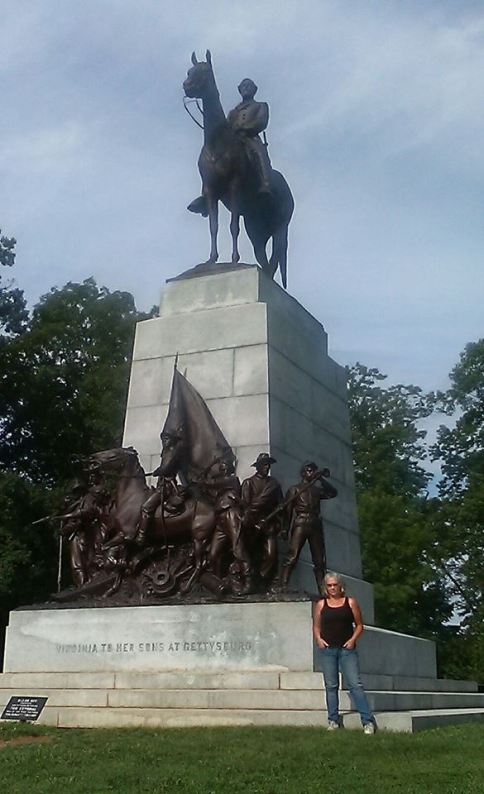 EXCERPT VOLUME 6 “THE OTHER SIDE OF TIME!”

“She was cut off by her own gasp when she saw the Confederate Colonel Marsh’s eyes were also crying tears of blood. As blood began to seep through the snow all around her, Summer didn’t know whether to stand still to escape it or to run for higher ground. The General came and scooped her up and placed her on the stone wall.

As he held onto her, he said, “It is as if they are cut into pieces and have died all over again.”

Summer inquired, “Why? What happened?”

The General replied, “It is in your time period their flag was removed. I cannot tell you what to do or how to do it. But I can say this, each time the battle flag is removed as a symbol or racism or hate, the tears fall. I am afraid, the war has begun again in our time. Look around you. Their sacred blood is being spilled, their bodies are once again shredded. The Cause in which they gave their “last full measure of devotion” is being desecrated. Men, who led them in battle are being dug up from their peaceful slumber, monuments to brave Generals are being vandalized and torn down. Some of their Confederate brothers’ gravestones are also being destroyed.”

Another monument to the great General Lee was removed in Dallas. I cringe at how history will be taught years from now. When I was growing up, it was taught wrong. I was taught the Civil War started because of slavery and that all Confederates were bad! It really wasn’t until I did my own in depth research that I found out the truth. Not to mention the fact, I have Confederate ancestors. But years from now, what are they going to teach, “That the Civil War did not exist?” Pathetic!!! Well, as much as I am able to, I will keep history alive via my Summer Ray story. If I have to keep on writing book after book, so be it! If we have to plaster flyers all over this country and billboards on the highways and byways, so be it! We will put the Confederate flag up on those billboards and pray that Angels will stand guard over it. God is not happy our American history is being destroyed. General Lee was a God fearing man, who was loyal to his Virginia. That doesn’t make him a racist. It makes him a Patriot!!!

One thought on “IT MAKES HIM A PATRIOT!!!”