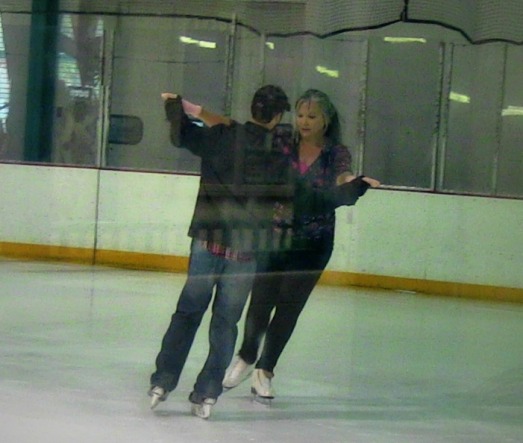 What does it take to be a champion? First we have to define it. In sports, it is defined as, “a person who has defeated or surpassed all rivals in a competition, especially in sports.” But the word “champion” has other definitions which are defined as “a person who fights or argues for a cause or on behalf of someone else; advocate; promoter – to further the cause of; supporter; backer; exponent – one who promotes the truth.” Why is this so important and what does it have to do with the film. Well, just about everything.

Take a look at the above picture. This is Justin my Figure Skating Coach. Without him, I would not be where I am on the ice today.  I would not even have the hope to create the goals, toward winning national or international championships. A great coach sees our potentional, not our age! This is important because I am 54 years old. I have heard that “If you are 50 or over, a double axel is impossible.” It is said our bodies just cannot function at that level when we are THAT old.  Say what??? It is only impossible because those who believe it, already set themselves up for failure. So they do not do the possible tasks, of the necessary training, to advance to that level. This type of skill does not come without years and years and years of practice. But it also involves off ice training as well and good healthy nutrition. My coach sees my potentional, not my age. But, I also must see what he sees. I also must maintain the right verbage. The Bible says “Life and death are in the power of the tongue.” If I look at the double axel and my age and immediately think, “Yeah right, not a snowball’s chance in Hell, can I ever do that.” Well, that is exactly what I will have! Not because it isn’t attainable, but because I refuse to try. So, I look at the double axel as a goal that I am determined to achieve. Because regardless of my age, I am willing to put the necessary training into accomplishing this amazing goal. But, what will make it an astonishing goal to accomplish, IS my age. But not because I am over 50. But because so many millions of people think that this is an impossible thing to do, when you are over a half a century in years.

My skating hasn’t been without the bumps, brusies, or frustrations. But, I have kept going. I have healed and have picked myself back up and continued to skate. I am 100% convinced that I will someday qualify for the Adult Figure Skating World Championships. Whether I win a gold medal, remains to be seen. But, if I looked at that competition and thought, “I won’t happen,” then I will not do what needs to be done to reach that level.

So what does all of this have to do with the film? Well, precisely the same thing. The backers and the investors are the champions that will help us get this film to production. But every person who reads the book; every person who donates and helps to spread the word about us, are also our champions. You help to further our cause. So whether you donate one dollar or one million, your value to us is the same. We see you as the champions and the backbone of our film. Just like I cannot accomplish my skating goals without my awesome coach, we cannot cross the finish line to distribution, without you all as well.

We are commited to this book series becoming the Summer Ray Saga on film. Just because it has crossed into the start of the 9th year, perhaps like a fine wine, we are getting better with age. We have become more mature and wise. We are more robust and flavorful, with features that we did not have years ago. The impossible is not in our thoughts. In fact, our production company name “Inexorable Productions” has the literal meaning of “impossible to stop.” We are relentless because of our belief in this project. I am relentless on the ice and what I need to do to train to become a champion, because I believe in that as well. We are also persistent – “continuing firmly or obstinately in a course of action in spite of difficulty or opposition.”

It might be difficult and we certainly have had our share of opposition – “resistence, rivals, hostilities and adversaries,” but we are still here! I am still writing. I am still taking lessons and taking figure skating tests. We are still pressing forward and going ahead with our plans to get into production. Just because it looks impossible, doesn’t mean it is. “All things are possible to those who believe.” We believe and therefore…WE WILL!